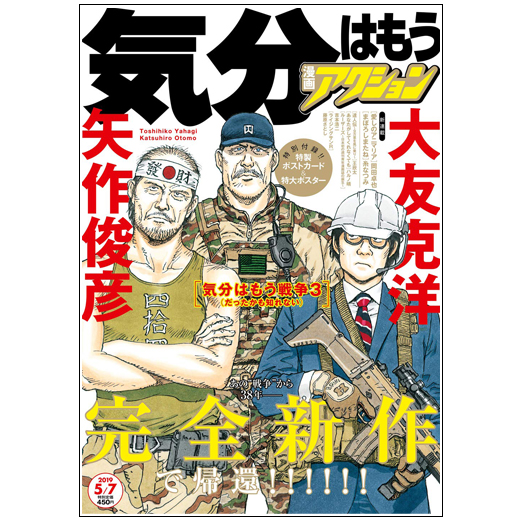 Katsuhiro Otomo has illustrated the cover of Manga Action (漫画アクション) magazine No.9 - 5/7 coinciding with the  publication of his 17 page-long manga: KIBUN WA MŌ SENSŌ 3 DATTA KAMO SHIRENAI (気分はもう戦争 3 だったかも知れない), a sequel to KIBUN WA MŌ SENSŌ  (気分はもう戦争) written by Yahagi Toshihiko (矢作俊彦) and illustrated by Otomo himself. This issue includes an extra-large poster and a postcard attached as an appendix featuring this same illustration. The original manga was collected as a book titled KIBUN WA MŌ SENSŌ (気分はもう戦争) (1982 edition | 2000 edition) after being serialized in Weekly Manga Action 38 years ago, between the years 1980 and 1981, in 16 chapters. Manga Action is the magazine in which Otomo debuted back in 1973 and where the majority of his short stories were published during the seventies and early eighties.