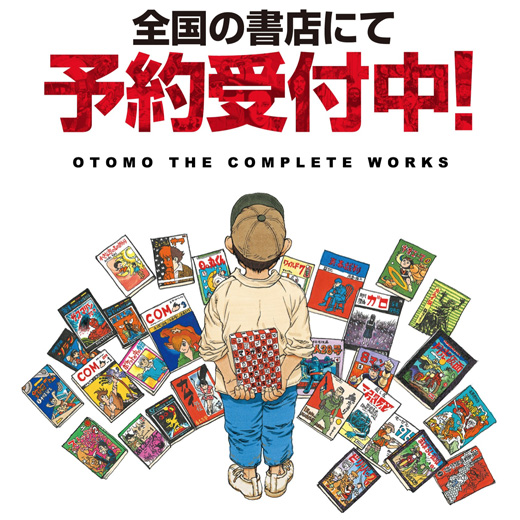 Katsuhiro Otomo has announced  in the Otomo Zenshu twitter and instagram accounts and in the official OTOMO-COMPLETE website, accompanied with a new illustration, that the reservations of his upcoming COMPLETE WORKS started today nationwide in Japanese book stores.
Otomo himself previously tweeted that starting on January 21st, two books will be released every other month and that works will be printed in a B5 variant, 248 x 172mm size. The first printing will include a newly designed sticker.
The first two books to be published on January 21, 2022 by Kodansha will be volumes 8 and 21:
Vol. 8: DŌMU (童夢)
The title selected to inaugurate OTOMO THE COMPLE WORK is DŌMU (童夢), a manga work that was first published in four parts in magazine format and later collected as a book that after 60 editions has been discontinued for over 20 years now.
In this new edition, the image quality has been improved by the newly created version from the original artwork and the print quality has been significantly improved by the quality of the paper that has been carefully selected. In addition, the title page covers, which were not collected in the book, and the bi-tonal original images have been recovered. The illustrations that Otomo had envisioned for the book covers have also been reproduced and a new commentary by Otomo closes the book. The format is a B5 variant size (248 x 172mm).
BOOK DETAILS
Publisher: Kodansha (講談社)
Release date: 2022-I-21
Language: Japanese
Number of pages: 252
Size: 248 x 172mm
Retail price: ¥2,970
ISBN-10: 4065262631
ISBN-13: 978-4065262634
AVAILABILITY
Amazon JP: https://amzn.to/3CbzqKg
Vol.21: Animation AKIRA Storyboards 1
This book is the first volume out of two, of a huge amount of storyboards drawn by Otomo himself during the production process of  the anime version o AKIRA. Originally published also as two separate volumes by the editorial department of Young Magazine in 1988, both volumes AKIRA E-KONTE 1 (アキラ 絵コンテ集 1) and AKIRA E-KONTE 2 (アキラ 絵コンテ集 2) have been out of print for a long time and are difficult to obtain these days.
Storyboards are often thought of as rough blueprints, but the precision of the AKIRA storyboards is something else. Otomo drew them around 1987 when he was in the middle of the serialization of the fifth volume of the manga AKIRA. Work that he had to interrupt for 17 months to fully focus on the production of the movie version.
AKIRA storyboards are drawn with the tension of the serialization period and the dynamic feeling of the characters are at a level comparable to the main story of the manga. This book collects the  first half, parts  A and B  out of the four parts, A, B, C, and D that the movie is formed of. This large volume of nearly 500 pages is like reading the movie, the animation will be reproduced in the readers brain just by looking at it providing a unique insight to Otomo's animation production techniques.
BOOK DETAILS
Publisher: Kodansha (講談社)Release date: 2022-I-21Language: JapaneseNumber of pages: 488Size: 248 x 172mm Retail price: ¥4,400
ISBN-10: ‎406526264X
ISBN-13: ‎978-4065262641
AVAILABILITY
Amazon JP: https://amzn.to/30icGvv
Illustration Illustration 'Promotional' The Complete Works