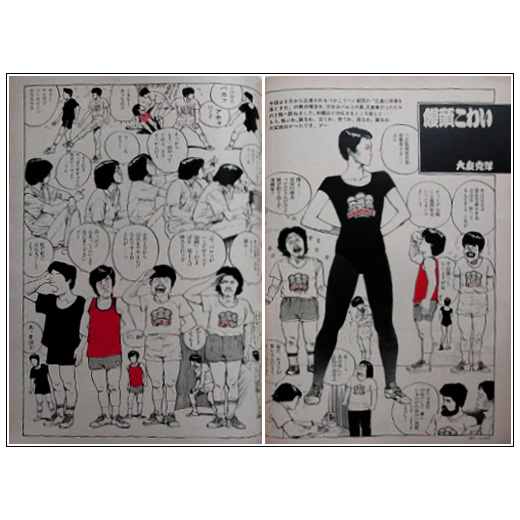 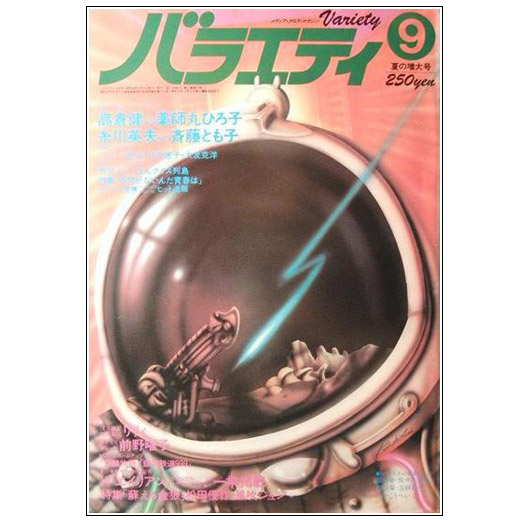 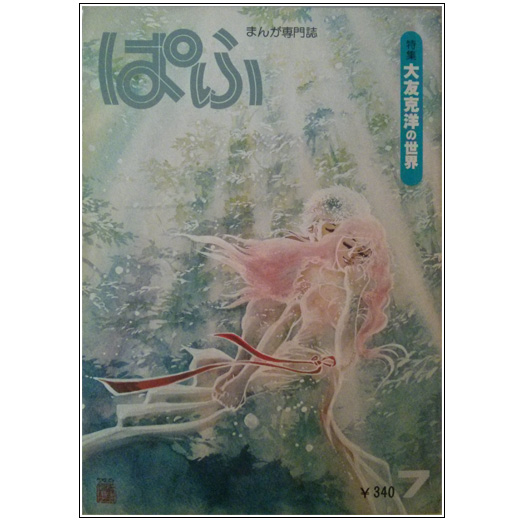 This month's PAFU (ぱふ) magazine covers Katsuhiro Otomo's world with an extensive chronology of his works as a manga artist and illustrator as well as a interview and a reprint of the 22 page, 1977-I-7 published, YUME NO SOOKYUU (夢の蒼穹) manga collected later in the book SHORT PEACE. Various self-portraits illustrations by Otomo are included 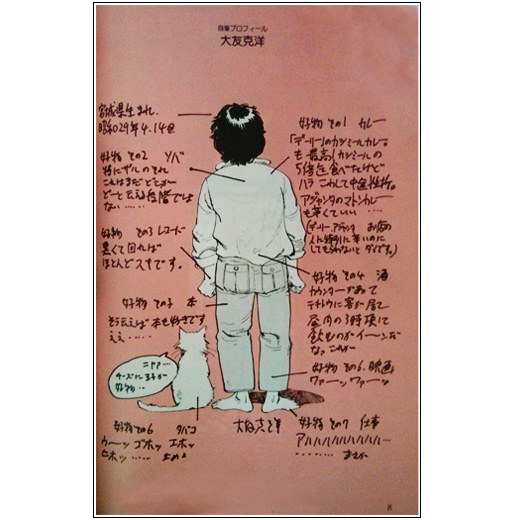 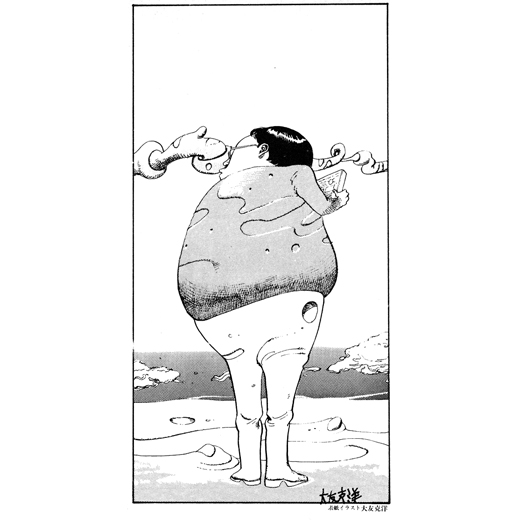 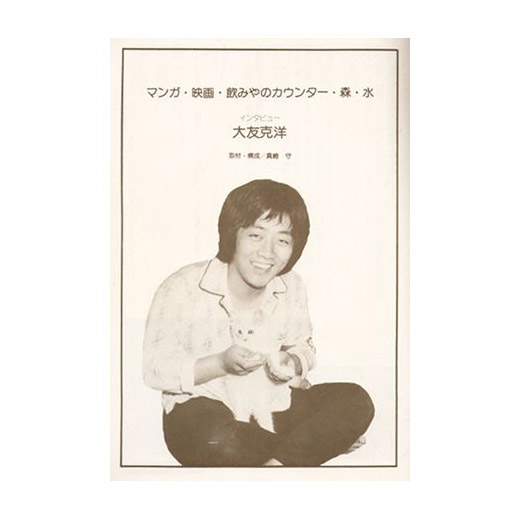 This interview by Masako Mori (真崎 守) was published for the first time in Pafu (ぱふ) Magazine July 1979 issue. It was later collected in the page 26 of the book GENGA.


How old were you when you had your first work published in Manga Action?
Eighteen.

For a while there you were only publishing very sporadically weren't you? When did your output become a bit more regular?


Well, at junior high school I was really keen on being a manga artist. Then I got to high school and gradually moved away from that as various other influences kicked in. I started to watch movies all the time. Thus at that stage I leaned more toward film, and at high school thought if I were to go on to higher education, it should be art school or something of the sort. But my school was quite academically oriented, more than you might think, and everyone around me was studying really hard. Even in the lunch breaks ... Bit of a drag; plus it was at around this time I started wanting to support myself.

I see.
... So then I thought well, I can draw after a fashion, so maybe I can draw for a living. Thus I ended up drawing for (Manga) Action①, and was on their books for years ... Then starting two or three years back, I guess I began to think about getting into it seriously.

In terms of your work, at what point was this?


To start with, personally I like stuff like the old Kizu Darake no Tenshi ②. Then when I started doing stories it struck me that a manga might be interesting too. So I was at that point I vowed to really give it my best shot.

Where are you from?

Have you lived around here since you first came to Tokyo?


No, initially I stayed with relations in Nippon for a year or so. Then I went to Minami-Urawa where I also had family. It was really quiet around there. In Nippori I wasn't able to play records, and thought I might be able to in such an isolated spot. but soon after I arrived some apartments went up, so that was that. I have to say though, Minami-Urawa was fascinating. There were lots of little bars nearby, and bars in a place like Minami-Urawa, Saitama tend to be run by and for folks from the regions. So there were people who looked like yakuza, the odd pervy-looking type ... a really intriguing bunch. I was only there four years, but it was quite an education, I can tell you.

Hearing about that brings to mind some of your work.


You seem to have been observing It all pretty closely. There were new housing developments around there, with two-story houses on these pocket-handkerchief plots of land, and no gardens of course. And the people in them were, whichever way you looked at it, just your ordinary salary man types. Every Sunday they'd for example go out and buy concrete blocks and do a bit of landscaping on their properties. I think that's where I got the inspiration for Kazoku (Family).

You seem to be a big film fan; can you talk to us a little about film?


There are just so many... I watched anything that came to the theaters Initially New Cinema was quite an influence, not surprisingly. Films like Bonnie and Clyde④, Easy Rider ⑤, and the one of that period that just blew me away, Sam Peckinpah's Straw Dogs ⑥.


What other sorts of things?

Where did Hansel and Gretel emerge from?


Hansel and Gretel was a long time in the making. I drew it between jobs. without a clue where I'd publish it. At (Manga) Action no one was interested in hearing that I'd penned Hansel and Gretel. Nor did anyone comment much when I showed it to them.

Was it a series of drawings you'd done over time?


Around that time I was doing jobs for Action and the like and had deadlines to meet, so a lot of it I couldn't finish drawing properly. I got help on the backgrounds and so on. Hansel and Gretel was prompted purely by my personal desire to draw. So it didn't really matter what the story was. I wanted to try something unlike much I'd done before. Plus I'd been drawing similar stuff for a while. It's not like I have a problem with that genre, fairytales, I guess you'd call it. I just felt I could no longer draw normal fairytales, so I'd have a go at that.

There are some strange creatures in it aren't there?


Oh those, yes. There's a real model for them. Bruegel ⑪, would you believe (pulling a book off the shelf and showing pictures from it). Ah, see that frog-like thing wearing the helmet (laughs). No bird-like things, so I did those myself. The first birds were the ones you see round here. Bruegel was the inspiration for a lot of the background as well.

Tell me about what I guess you'd call your first memories, favorite scenes from childhood, scenes that have stayed with you.


Hmm, let me think. A scene from long ago, indeed from childhood. Back then I lived in the country, though it was surprisingly built up. Out the back you were straight into rice paddies. I remember there being lots of water. So actually when it comes to food, I can't stand things like bread: it has to be moist to be palatable to me. The Idea of going to anywhere like a desert doesn't appeal much. A European scene with lots of forest, that's more like it. Yes, a wooded landscape of that sort. Back in those days there were lots of trees growing there, and when I was a child I didn't leave the house very much. There were lots of trees over in that direction, and I wanted to go there. With paddy fields nearby: I dream about it a lot actually.


① Manga Action (漫画アクション) is a Japanese seinen manga magazine published by Futabasha. It is currently published twice a month, on the first and third Thursday. The magazine was originally formed as Weekly Manga Action (WEEKLY漫画アクション) and began publishing weekly from July 7, 1967. It is considered the first true seinen magazine. In 2003 it changed to its current publishing format and dropped the Weekly part of its name to reflect its new schedule. [source: wikipedia]

③ Shotaro Ishinomori (石ノ森章太郎) (January 25, 1938 – January 28, 1998) was a Japanese manga artist who became an influential figure in manga, anime, and tokusatsu, creating several immensely popular long-running series such as Cyborg 009 and Himitsu Sentai Gorenger, what would go on to become part of the Super Sentai series, and the Kamen Rider Series. He was twice awarded by the Shogakukan Manga Award, in 1968 for Sabu to Ichi Torimono Hikae and in 1988 for Hotel and Manga Nihon Keizai Nyumon. He was born and named Shotaro Onodera(小野寺 章太郎) in Tome, Miyagi, and was also known as Shotaro Ishimori (石森 章太郎) before 1986, when he changed his family name to Ishinomori with "ノ". [source: wikipedia]

④ Bonnie and Clyde (1967) is an American biographical crime film directed by Arthur Penn and starring Warren Beatty and Faye Dunaway as the title characters Clyde Barrow and Bonnie Parker. The screenplay was written by David Newman and Robert Benton. Robert Towne and Beatty provided uncredited contributions to the script; Beatty also produced the film. The soundtrack was composed by Charles Strouse. [source: wikipedia]


⑤ Easy Rider (1969) is an American road movie written by Peter Fonda, Dennis Hopper, and Terry Southern, produced by Fonda and directed by Hopper. It tells the story of two bikers (played by Fonda and Hopper) who travel through the American Southwest and South. The success of Easy Rider helped spark the New Hollywood phase of filmmaking during the early 1970s. The film was added to the Library of Congress National Registry in 1998. [source: wikipedia]


⑥ Straw Dogs (1971) is psychological thriller directed by Sam Peckinpah and starring Dustin Hoffman and Susan George. The screenplay, by Peckinpah and David Zelag Goodman, is based upon Gordon M. Williams's 1969 novel, The Siege of Trencher's Farm.The film's title derives from a discussion in the Tao Te Ching that likens the ancient Chinese ceremonial straw dog to forms without substance.  [source: wikipedia]

⑧ Frank Capra (May 18, 1897 – September 3, 1991) was an Italian-American film director, producer and writer who became the creative force behind some of the major award-winning films of the 1930s and 1940s. Born in Italy and raised in Los Angeles from the age of five, his rags-to-riches story has led film historians such as Ian Freer to consider him the "American dream personified." [source: wikipedia]

⑩ Luis Buñuel (22 February 1900 – 29 July 1983) was a Spanish filmmaker who worked in Spain, Mexico and France. Often associated with the surrealist movement of the 1920s, Buñuel created films from the 1920s through the 1970s. His work spans two continents, three languages, and nearly every film genre, including experimental film, documentary, melodrama, satire, musical, erotica, comedy, romance, costume dramas, fantasy, crime film, adventure, and western. Despite this variety, filmmaker John Huston believed that, regardless of genre, a Buñuel film is so distinctive as to be instantly recognizable. [source: wikipedia]

⑪ Bruegel ( c. 1525 – 9 September 1569) was a Netherlandish Renaissance painter and printmaker from Brabant, known for his landscapes and peasant scenes (so called genre painting). He is sometimes referred to as the "Peasant Bruegel". From 1559, he dropped the "h" from his name and signed his paintings as Bruegel. [source: wikipedia]