●ARTICLE● THE MAKING OF AKIRA THE EPIC COMIC PART III 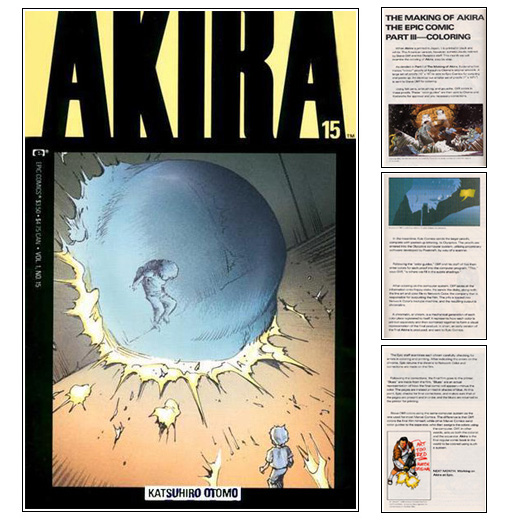 This month's AKIRA issue #15 released in the US by EPIC and collected in OORU KARAA KOKUSAI BAN AKIRA 5 (オールカラー国際版 AKIRA 5), includes a two page article on the making of the colored version of AKIRA.

THE MAKING OF AKIRA THE EPIC COMIC PART III - COLORING

When Akira is printed in Japan, it is printed in black and white. The American version, however, is meticulously colored by Steve Oliff and his Olyoptics staff. This month we will examine the coloring of Akira step by step.

Using felt pens, airbrushing and gouache, Oliff colors in these proofs. These "color guides" are then sent to Otomo and Kodansha for approval and any necessary corrections. 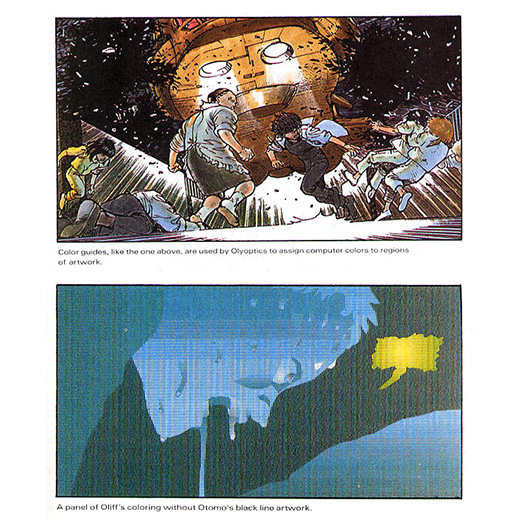 In the meantime, Epic Comics sends the larger proofs, complete with pasted-up lettering, to Olyoptics. The proofs are entered into the Olyoptics computar system, utilizing proprietary software developed by Pixelcraft, by way of a scanner.

Following the "color guides," Oliff and his staff of five then enter colors for each proof into the computar program. "This," says Oliff, "is where we fill in the subtle shadings."

After coloring on the computar system. Oliff saves all the information onto floppy disks. He sends the disks, along with the line art and color file to Network Color, the company that is responsible for outputting the film. The info is loaded into Network Color's linotype machine, and the resulting output is
chromalins.

A chromalin, or chrom, is a mechanical generation of each color plate registered to itself. lt represents how each color is printed separately and then combinad together to form a visual representation of the final product. In short, an early version of the final Akira is produced and sent to Epic Comics.

The Epic staff examines each chrom carefully, checking for errors in coloring and printing. After indicating the errors on the chroms, Epic returns the chroms to Network Color and corrections are made on the film.

Following the corrections, the final film goes to the printer. "Blues" are made from the film. "Blues" are an actual representation of how the final comic will appear-minus the color. The pages are instead printed in shades of blue. At this point, Epic checks for final corrections, and makes sure that all the pages are present and in order, and the blues are returned to the printer for printing.

Steve Oliff colors using the same computer system as the one used for most Marvel Comics. The difference is that Oliff colors the final film himself, while other Marvel Comics send color guides to the separator, who then assigns the colors using the computer. Oliff, in other words, acts as both the colorist and the separator. Akira is the first regular comic book in the world to be colored using such a system. 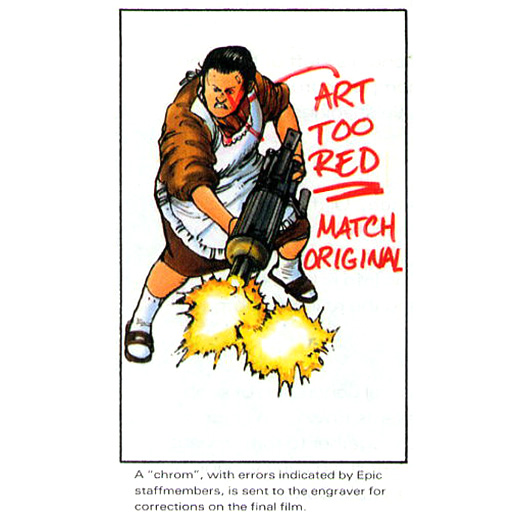