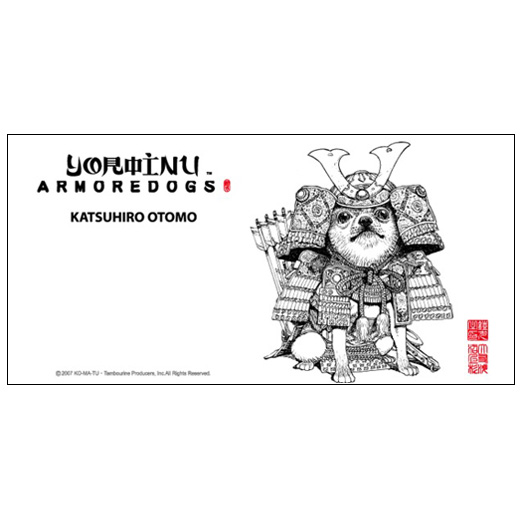 Katsuhiro otomo has designed the characters for a upcoming game unveiled today in San Diego Comi-Con called YOROINU (鎧犬) or Armoredogs. The illustrations are collected in the pages 80 to 81 of the art book KABA 2.


It wa the time of gekokujo (wich means the lower rules the higher or the low overcomes the high)...
The regime had collapsed, and has intrigued provincial feudal lords throughout the country to fight in wars to become the next ruler of the nation.
That's right. This is the beginning of the Sengoku period, the Age of Civil Wars.
BUT, that is just a story about humans.
Not many people know that dogs ALSO had the same ambition and wars just like humans…
“Respect bravery”
“Resist pride”
“Be honorable”
The true soul of a samurai dwells within his armor.
They are the “Yoroinu” – the armoredogs.
They battled under their flag to unite the world.
Fight your opponents!
The age of rival warlords has come!

Of course, you can get snacks as a reward!!

With the original “Yoroinu” illustration drawn by Mr. Otomo, the producer suggested that he'd like to reinvent the characters to bring cute and fancy heroes to the world!
The producer is an Ossan, which means middle aged man in Japanese slang. As a matter of fact, world famous Mr. Otomo is also a full-grown Ossan.

In 2007, these Ossan men got together to start this project,
Yoroinu is a word that combined Japanese words of “Yoroi” (Armor) and Inu (Dog).
An Ossan humor is used here for the character’s name!
Ossan men have been known to create cute and irresistible characters. In 2009, we are finally able to introduce them to you.
Don't miss these lovely Yoroinu characters.


Official site: http://www.yoroinu.com/ (the site is down)