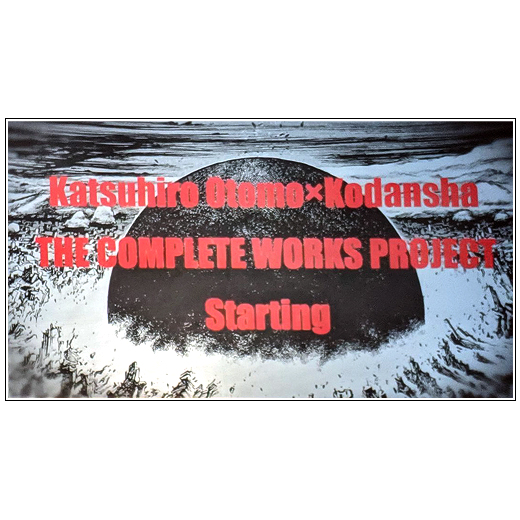 Katsuhiro Otomo and Kodansha have announced the publication of Katsuhiro Otomo's complete works, back from 1971 to this day and the future. A trailer was presented with this captions:

Manga, Illustration, animation, videos and collaborations...
Works getting created in the future.
Katsuhiro Otomo, known for his works that often straddle genres,
launches a completely new project.
The creator himself edits his own works.

Kodansha will publish the collection OTOMO: THE COMPLETE WORKS. Katsuhiro Otomo will personally edit and organize the retrospective with the goal of publishing a fresh collection of work through which fans can trace the trajectory of his ideas and creations as far back as the birth of his creative career. It will include every one of his works and statements in chronological order since his debut as a manga artist in 1971. The publication will go beyond a simple "complete collection," and can be regarded as "everything Otomo." Since one of its objectives is to inspire ALL creators and readers of the younger generation, the collection will be published not only in Japan but across the globe. More detailed contents and the release schedule are soon to be announced.
Announcements Kodansha