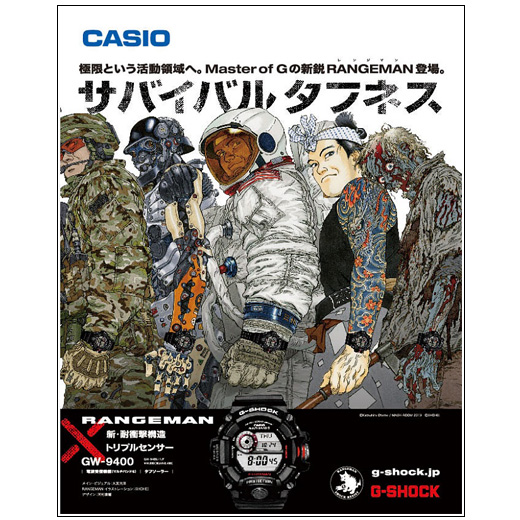 Katsuhiro Otomo has collaborated with his son Shohei for the printed commercial of the CASIO G-SHOCK watch RANGEMAN GW-9400. Otomo was in charge of the characters while Shohei drew the hyper realistic watch.
The official web site of Casio Computer Co., Ltd. (http://goo.gl/IOT4CT) will open a special site in the following days with interviews with Shohei and Katsuhiro Otomo. Check http://g-shock.jp/rangeman
Check Shohei's artwork in his official website:
http://www.hakuchi.jp/ http://shoheiotomo.com

Casio has also made a video commercial for the occasion:

The Japanese Ministry of Education (文部科学省) awarded Katsuhiro Otomo this 2013 autumn with the Medal of Honor with Purple Ribbon. He received the honor for "his unparalleled skills in illustration, composition, storytelling and acute visual sense that went into the many excellent works he produced as a manga artist and animation film director over a long period of time, which resulted in garnering international attention and contributing to development of our country's fine arts and culture." The Medal with Purple Ribbon that was given to 16 individuals in 2013 usually goes to individuals who have contributed to traditional arts, crafts and performing arts. Previously, the medal was given to only three animation artists: Yoji Kuri (久里 洋二), Taku Furukawa and Isao Takahata (高畑 勲). The composer Joe Hisaishi (久石 譲), who collaborated with Otomo in the Robot Carnival Soundtrack was awarded with this medal back in 2009. Katsuhiro Otomo together with the other recipients had an audience with the Japanese Emperor in the Imperial Palace. This is the second time an anime film director receives the award after Isao Takahata (高畑 勲) in 1998


TRANSCRIPTION OF THE INTERVIEW

I am Katsuhiro Otomo

Q1: Please give your thoughts on receiving the Purple Medal of Honor

I am very surprised and don't feel I deserve this. It's a bit confusing, as I'm not that old and yet, feel old at the same time.

Q2: how have the people around you reacted to this?

Everyone was happy for me. It's very hard to tell if your own work is good or not. When I'm alone, I'm always confused if what I'm doing is ok. I guess that's what has been recognized in this award. I'm happy, it's like I've been told that I can continue on proceeding with my work.

Q3: Among your cartoons and animated/live action films, hat is your most memorable work?

I should say AKIRA. It was my first long-term serial publication, and I also directed the animated film adaptation. The international version was released with the collaboration of US Marvel Comics. AKIRA was probably the first Japanese cartoon released overseas. There were many aspects, which made AKIRA very memorable, such as the translation, and creating western comic books which open up totally opposite, from right to left.

Q4: What message are you trying to convey though your work?

It really depends on each piece such as the era in which the story takes place, and on how old I was when I wrote it. I search for themes to project in the story and the characters by getting hints from events occurring in society and my thoughts at the time. I'm always searching to arrive somewhere though my work. More than having a theme and writing for the sake of the theme. I try to arrive at that place using various methods.

Q5: What kind of place did you arrive at in your work AKIRA?

I totally forgot about this. A bar owner told me that I was in the news. Don’t worry, since it was just by mere coincidence.

Q7: Where does your drive to create come from?

It goes back to cartoons and novels I read when I was a child. I loved these books and still do. I still think about how a story should develop. I just love writing stories. I’m not exactly sure where this desire comes from. But I have been immersed in such stories ever since my childhood.

Q8: Many of your works surprise people. Where do your ideas come from?

It must be from going outside. Although there is a point in time when I create stories in my head, the initial idea comes from going outside, whether it be a bookstore, a CD shop, or a bar, and to just go out people-watching. That’s where I get my inspiration from. A city can really change when you don’t visit it for a while. These are sources of inspiration. Like how a city suddenly changes without you realizing it. I was in shock when I recently visited Shinjuku. Places you haven’t been to for a while become totally different. I’m inspired by a certain period of time and myself being in that place.

Q9: What kind of works do you wish to make in the future?

Q10: After your work AKIRA, Japanese cartoons and animated films became highly regarded worldwide. How do you feel about this?

I have been watching US and French films ever since I was a child. We create art by viewing the works of our predecessors. We exist on top of this, and then the next generation succeeds. So I feel stories continue on in this way. So I must further devote myself to my work, to be able to have a positive influence on those succeeding me.

Q11: Specifically what kind of impact do you wish to have in the future?

Although I do have thoughts about how I wish to create a piece, the end product is a totally different matter compared to mere thoughts which just in your head. So it’s difficult to know what I am having an influence on… Perhaps people’s sense of the world.

Q12: How do you think Japanese culture should be disseminated?

There are some strange forms of dissemination now. For example, I do feel the otaku culture is a little twisted. I hope to correct this image a little more. I won’t say its bad, but I do feel this aspect has gone slightly out of control. It would be nice if we can transmit something a little more calmer. This is something we must do.

Q13: Do you plan to develop your current work overseas?

This is undecided. We may possibly work with someone overseas. There may be issue of how to attain funding. It’s still up in the air.

Q14: You’ve been active in various fields. What are the differences between Japan and overseas?

I’ve known that it’s tough working in the movie-related industry in the US. For publishing, it’s easier to work in Europe than in the US. I would love to go. I did try to a long time ago, but always end up not going from being too busy with work. It would be pointless to go for a short term period of just one month. I did seriously consider it once, but never had the chance.

Q15: Please give a message for young people aiming to become a cartoonist and director like you.

If you want to make a piece, I think it’s important to know the vastness of the world. The world is vast. You should expose yourself to novels, culture and art. Try to see and read as much as you can to be able to store this information in yourself. Although this requires effort, it’s very difficult to reach an individual form of expression if you don’t do this. So please work hard.