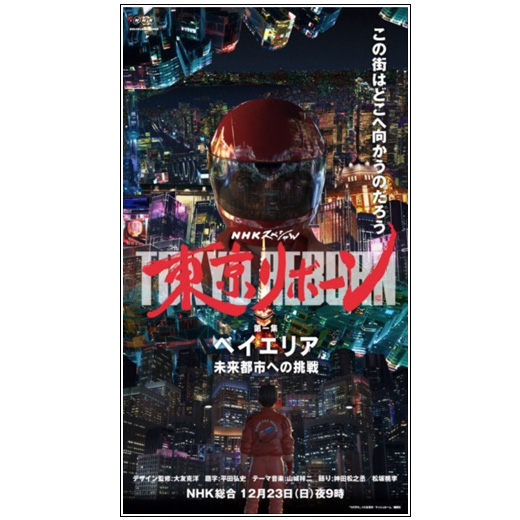 Katsuhiro Otomo has been involved as design supervisor of the title image of the upcoming NHK documentary series about the evolution of Tokyo titled NHK SPECIALl TOKYO REBORN (ＮＨＫスペシャル シリーズ「東京リボーン」). To be broadcasted over the course of two years from December this year, the series is a large-scale program that depicts the evolution and reproduction of Tokyo under the view of the world of "AKIRA". Shoji Yamashiro the original composer of AKIRA soundtrack  is in charge of the theme music of the program.

The first episode titled "Challenge to the Bay Area Futuristic City" will be broadcasted on December 23rd at 9 pm in Japan. In the official announce website a 2-minute video was published as well as some comments by Katsuhiro Otomo and Shoji Yamashiro.

NHK posted the opening in their YouTube channel: https://youtu.be/8ttEulEkYbE