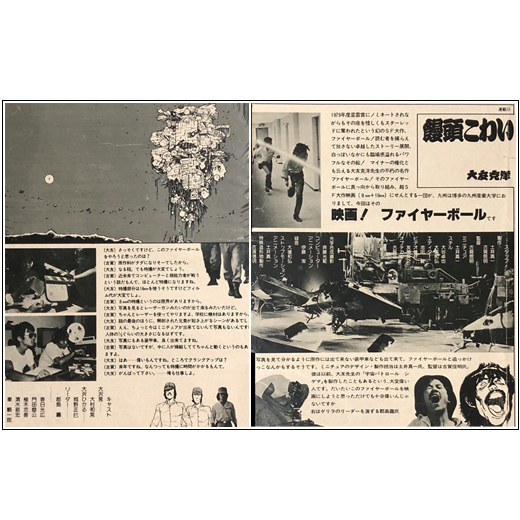 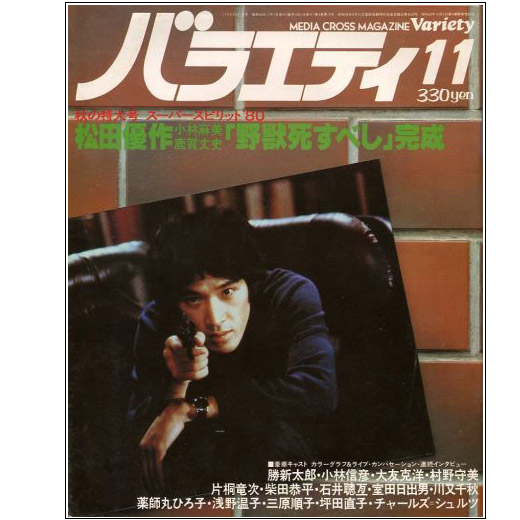 Otomo's FIRE-BALL manga is being adapted to o film  in Kyushu Sangyo University (九州産業大学) in Hakata, Kyushu, with Masakazu Doi (土井真一) in charge of designing and producing the miniatures, and Nobuaki Koga (古賀信明) as director. Otomo and Koga had a talk for this issue.
TALK: KATSUHIRO OTOMO × NOBUAKI KOGA
(Otomo) It's early, but what made you want to do this Fire-Ball?
(Koga) Because it seemed that the original work fee would be free.
(Ohtomo) I see. But it will be especially difficult.
(Koga) It's a story about a computer and a psychic fighting in the near future, so it's almost special.
(Otomo) I heard that 16mm is used for the special effects part, but the cost of the film is very high.
(Koga) There is a limit to 8mm special effects.
(Otomo) When I look at the photo, it looks like something that looks like a laser gun.
(Koga) I'll use the laser properly, because the school has the equipment.
(Otomo) At the end of the story, there is a scene where the dissected brother gets up.
(Koga) Yes, I haven't made a miniature yet, so I don't have a picture. It should be about the size of a human body.
(Otomo) The armored car in the photo is well made.
(Koga) I don't have any pictures, but there are some that are operated properly by people inside.
(Otomo) Ah... that's right. By the way, what about crank up?
(Koga) Next year. It's especially time consuming.
(Otomo) Please do your best. I'll work too.
1979-83 Manju kowai Comments talks & interviews Illustrated Essay Kadokawa Magazines Masakazu Doi Nobuaki Koga Not Collected Variety